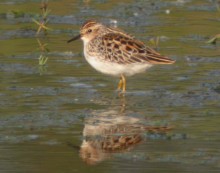 Australia:  Recorded in all states and territories of Australia, with most being from Western Australia (as many as 96 have been recorded in one count).

Migrates from Siberia south into south-east Asia, the east coast of India, Malaysia and the Philippines.

Breeding areas not well known but thought to be in Siberia and east to the Kamachtka Peninsula.