Australia: Has been reported from Queensland, New South Wales, South Australia, Northern Territory and Western Australia.  Two reports in Queensland have been accepted whilst some have been rejected.  The report from New South Wales is unaccepted.  The South Australia has two accepted records and one unaccepted report.  In Western Australia five records have been accepted.  The Redshank in Northern Territory should be considered as an irregular visitor with several records for this species.  This species might be more common than though given the areas it has been observed. 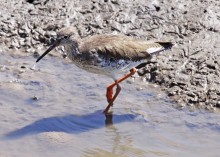 This bird migrates to Africa, western Europe plus southern and south-eastern Asia

The Redshank breeds right across Eurasia.

Vagrant, though might be considered a rare visitor in some regions.
East Asian-Australasian Flyway Population:  65,000