Medium sized wader, with a medium bill and legs.  Grey plumage with dark chevrons on its flanks.

Non-breeding:  The back of this bird has a scaly grey appearance from the nape through to the rump, and the wings.  This is because the grey feathers are margined with white.  The chin and throat are white.  There is an indistinct pale supercilium.  The sides of the neck, breast and flanks are marked with “arrow-head” shaped, dull black coloured chevrons.  The belly and vent are white.  The medium, slightly down curved bill is black and the legs grey. 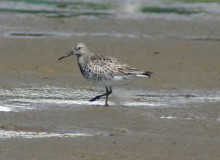 The top of the head and nape are streaked black and white, whilst the rest of the top of the bird is black the feathers here are edged in white and chestnut.  The supercilium is less noticeable.  The sides of the neck, breast and flanks are heavily marked with black sometimes giving the appearance of a completely black front.

Found all around the Australian coast, though the majority of birds are found in the north of the country.  Once thought to be a rarer bird in Australia, but surveys of the north now make this one of the commonest waders in Australia.  Found feeding on the mudflats of inlets, estuaries and lagoons, then roosting on sand-bars, beaches etc.

Great Knot leave our shores during March and April for their breeding grounds in far northern Siberia.  They return to us in August and September.

Common in the north, rarer further south; but seen easily in these other areas.