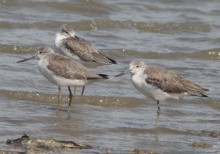 A large grey and white wader with long legs and neck.

Non-breeding:  The noticeable feature is the white underparts.  The mantle, scapulars and wing coverts are grey speckled with white.  The head, nape, the back of the neck and the ear coverts are white streaked with a darker grey.  There is an indistinct white supercilium.  The slightly upturned bill is bicoloured being grey with an olive-green base.  The legs are long and olive green.  The rump and back are a clean white.
Breeding:  The plumage is similar but the feathers of the back are darker, and the head and neck are more heavily streaked.
Juvenile:  Similar to adult, with upperparts feathers darker with buff edges.

Found throughout Australia, though mainly on the coast.  More birds are observed in the north-west, and the south-east areas of Victoria and South Australia.  Tends toward the salt marshes and mudflats.  Can be found in pools and lagoons behind the ocean shores as well as vegetated inland wetlands.

Greenshanks leave our shores during March and April for their breeding grounds in the Taiga and northern steppe zones between 50°N and 70°N.  They return to us in August and September.

The Greenshank breeds over vast areas of the taiga forest and northern steppe zones between 50°N and 70°N, from Scandinavia in the west through to the Kamchatka Peninsula in the east.

Marsh Sandpiper:  This bird is 30% smaller, and has a slighter, more delicate build.  The bill is needle-like.  In flight its legs dangle noticeably beyond the tail.