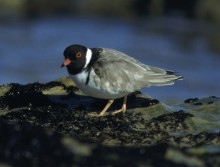 Medium sized wader that is pale brown and has a black cap.

Adult:  The head is black.  The nape is white.  The back of the neck and the front of the mantle are black.  There is a black patch that runs down the sides of the breast.  The underparts are white.   The mantle, scapulars and wing coverts are pale sandy-brown.  The rest of the back is sandy-brown.  The rump and the tail are white.  The tail has a dark central line.  There is a red orbital ring.  The bill is short, red with a black tip.  The legs are pink.
Juvenile:  Similar to the adult plumage but the black of the head and neck is brown.  The bill is brown with an orange base.  The legs are orange.

Non-migratory, but there seems to be aggregations after the breeding season suggesting some local migration.

The nest is a shallow scrape in the sand or gravel of a beach just above the high-water mark.  The three eggs are incubated for about 30 days.  The nest sites are subject to disturbance by predators, native and introduced, and humans in person and their 4-wheel drives.  Some nests are lost because of extreme high tides.

Not abundant and is considered to be threatened because of habitat loss and disturbance.  The estimation of the population is about 5,000 birds.

Sanderling:  In adult plumage there is no problem, but the juvenile might present difficulties.  The Sanderling does not have any brown and the Hooded acts like the plover it is.