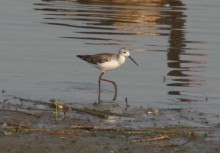 Medium sized, long-legged wader that is grey and white with a needle-like bill.

Non-breeding:   The top of the head is grey, with a  neck streaked with black.   The rest of the head and neck, except the chin and throat is streaked  with grey.  The back and wings are grey with white edges to the feathers.  The underparts, from the chin through to the vent are white.  The bill is black with a green base, and ‘classically’ termed as being needle-like.  The legs are grey-green.
Breeding:  The streaking is more heavily marked with dark grey, both on the head and neck as well as the back.
Juvenile:  Similar to the non-breeding adult plumage, but is more marked because the feathers are dark grey with paler margins.

Found throughout Australia. The largest numbers are to be found on the mudflats of northern Australia.  It is found in many different areas and habitats of Australia.  It inhabits inland salt water lakes, sewage works and along the wetlands of interior rivers as well as the usual coastal habitat.

The Marsh Sandpiper leaves our shores in March and through April.  They return to our shores during August and September.

Greenshank:  This bird is slightly larger with a heavier, slightly upturned bill. In flight the legs do not trail far behind the tail.
Curlew Sandpiper:  This bird has about the same body size as the Marsh Sandpiper and a similar plumage in non-breeding plumage so if the legs and bill are hidden it can appear the same as Marshie.