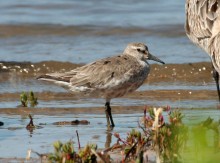 Non-breeding:   The chin, throat and breast are white streaked with grey, the rest of the belly and vent are just white.  The flanks are white but have distinctive dark grey chevrons. The crown and neck are grey streaked with black.  The rest of the back is grey, with the individual feathers being edged with white.  There is a white supercilium.  The bill is straight, black and about the same length as the head.  The legs are greenish-green.
Breeding:  The mantle, shoulders and wing coverts streaked chestnut with black and white.  The chin, throat, sides of the neck and rest of the underparts a chestnut-red.  The vent is white.  The overall appearance is a chestnut bird with streaking of black and white.
Juvenile:  Similar to the non-breeding plumage but browner and more heavily marked.  The fresh plumage has a buff wash.

Found in good numbers across Australia on the southern migration, with large over-summer numbers in the southern states.  The Red Knot is found to inhabit most coastal habitats, such as mudflats, sandy beaches, bays and inlets.

The Red Knot leaves our shores in March and through April, smaller numbers will be seen on the Queensland coast.  They return to our shores during August and September passing  through Queensland in good numbers to southern Australia and New Zealand.

The Red Knot breeds right across the Arctic, in separate areas, the subspecies rogersi
breeds from north-central Siberia to Alaska.

Australian Status: Common, with an estimated population of 158,000.
East Asian-Australasian Flyway Population:  about  220,000.