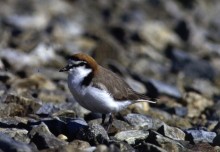 Small grey-brown plover that is white underneath and has a red-brown crown. Very little change in appearance during the year.

Adult Plumage: Male: The crown of the head and the nape are chestnut.  The forehead is white edged with black.  The rest of the upperparts are sandy-brown with the underparts are white.  The bill is short and black; the legs are black.  Female: The colouration is paler and the chestnut cap and nape are patchy.

Juvenile:  Similar to the female but the cap and nape are paler still. 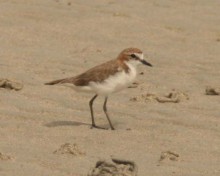 The Red-capped Plover is resident to Australia.  This bird does not usually undertake long journeys but it appears that there is some movement to the coast in the non-breeding period or if the is rain in arid areas.

Usually lays two eggs in a shallow scrape in sand, gravel and even amongst grass.  The position of the nest is variable being usually in the open but will build under a bush.

Commonly found throughout Australia.  It has an estimated population of 95,000 birds.  It likes coastal and inland areas using brackish and saline waters.  It has been found alongside any water you can think of; oceans to puddles in the arid inland.

Lesser Sand Plover:     Lager than the Red-cap and does not have the chestnut crown and nape.

Double-banded Plover: Lager than the Red-cap and does not have the chestnut crown and nape. Has a double band on the chest in breeding plumage.