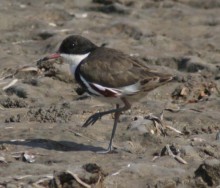 A medium-sized black, white and chestnut wader. It has an upright stance.

Adult:  The crown, nape, back of the neck, lores and ear-coverts are black.  The mantle, scapulars and wing-coverts are brown. The chin, throat and upper breast are white.  The rest of the breast is a black band that extends down the flanks becoming chestnut.  The rest of the underparts are white.  The short, straight bill is pinkish with a black tip.  The legs are grey but with the naming pink “knees”.
Juvenile:  The upperparts are reddish-brown.  The underparts are white with no black breast band.

Found throughout Australia, mainly in the southern areas, and more common to the east of the Dividing Range.
Migratory habits
Resident to Australia.  It is known to congregate in numbers up to about 500 birds just after the breeding season.  It also moves to the coastal areas if there is low rainfall in the interior.

Usually in lone pairs, though loose colonies have been noted.  The four eggs are laid in a shallow depression in the ground, usually between August and December.

The population for Australia is put at 26,00 birds.  This population is expanding to the north of the country with more records from Northern territory recently.  It is a visitor to Tasmania.