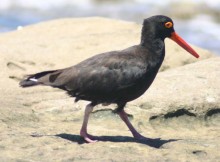 The Sooty Oystercatcher is a solid black bird with a red bill and pink legs, usually found on rocky shores.

Adult: This is a completely black bird, with a straight, strong long red bill.  The legs are coloured pink.  The iris of the eye is red.  The sexes are similar.
Juvenile:  It might appear to be less black.  The bill is orange.  The legs are grey

Found right around Australia, though considered rare in the north particularly in the Gulf of Carpentaria.  It is usually found on rocky coasts, off-shore islands, coral isles and single beaches, but will be found on sandy coasts.

Resident.  Most of the time it seems to be sedentary, with small local movements.

Secure but could become vulnerable due to disturbance and the few concentrations of this species.  The population is estimated to be about 4,000 birds.