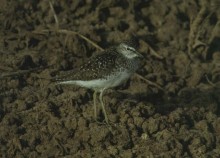 Medium-sized wader that has grey upperparts that are spotted.

Non-breeding:  The top of the head is brown-grey spotted with white.  The neck is grey streaked with white.  The mantle, scapulars and wing coverts are dark grey notched with white.  The back is grey.  The rump, uppertail coverts and tail are white, the tail having fine black barring. the underparts are white, the breast being washed with grey the sides streaked dark grey.  Bill is short, straight and black with an olive base.  The legs are olive-yellow.
Breeding:  Similar to the non-breeding plumage, with more sopping on the upperparts and more streaking on the head and breast.
Juvenile:  Similar to the non-breeding plumage but with browner tinge to the upperparts.

This bird is commonest in the north-west but is found scattered throughout inland Australia where there are good wetlands, this means areas that have lush waterweeds and fringe vegetation.  It can be found at non-tidal coastal areas, but it is not a bird of the mudflats.

This species arrives in September and spreads throughout Australia over the next couple of months.  It leaves our shore in April.  Its movements within Australia are not well-known.

The Wood Sandpiper breeds right across Eurasia in coniferous woodlands.

The estimate of population for the Wood Sandpiper is about 6,000 birds.  Because it is spread out it might have a bigger population than thought.

Sharp-tailed Sandpiper:  Similar in size but more markings on the upperparts and browner colouration.
Common Sandpiper:  This species is smaller, with shorter legs and plainer upperparts.