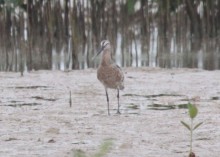 A large wader with a straight uni-coloured bill.

Non-breeding:   The head, and neck are streaked with grey brown on a white base.  The top of the head and a line through the eye are darker, whilst there is also a white supercilium.  The underparts are white, but  breast and flanks but slightly streaked with dark grey.  The rest of the upperparts are dark grey, with individual feathers having a thin buff border.  The bill is straight, long, black and has a swollen tip.  The legs are black. 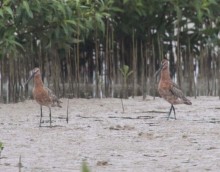 The crown, nape, most of the neck are a deep chestnut-red.  The supercilium is white and there is a dark line through the eye.  The rest of the upperparts are dark brown, with individual feathers being fringed with white.  The underparts are chestnut-red, though the breast and flanks are finely barred with black.  The belly and vent are white, barred with chestnut-red.

Juvenile:  Similar to the non-breeding plumage.  But feathers on the back are fringed with buff rather than white.  There is also buff on the breast and flanks .

It occurs mainly in north-western Australia, first being recorded in Darwin in 1971.  It is found in the tidal mudflats of the coast and estuaries.  Some flocks of over a hundred have been reported.  It is a rare visitor to other parts of Australia.

This species is little known in Australia, but arrives in September and departs in April.

The Asian Dowitcher breeds in three distinct areas; central and eastern Siberia, Mongolia and north-eastern China.  Its nest are found close to water usually in meadowland.

Regular visitor to the north-west of Australia, but rare in other parts.

Bar-tailed Godwit:  Very similar in non-breeding plumage to the dowitcher.  The plumage is more streaked.  The bicoloured bill is slightly upturned.

Black-tailed Godwit:  Very similar to the dowitcherin non-breeding plumage.  The plumage is less streaked.  The bicoloured bill is straight.