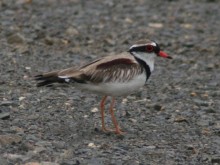 Adult:  The back is light brown varyingly streaked with darker brown.  The underparts are white from the chin right through to the vent, broken by a Y-shaped black breast band.  The head has a brown crown and a broad black band from the lores through the eye to the nape, above and below which is white.  The bill is red with a black tip.  The legs are cream to dull pinkish-orange.

Juvenile:  Similar to the adult, but no breast band, the head is browner than the adult, the bill pale and the legs paler.

This species has a Australia-wide inland distribution using all sorts of freshwater wetlands.  Shallow ponds, floodwaters and margins of rivers.  Its occurrence might be greater than thought because of man-made dams and water sources.

Resident species.  Any movement seems to be local.  It might be seen to flock in non-breeding times.

Usually a scrape in gravel or shingle areas close to water.  2-3 are usually laid.  The season can depend

Red-kneed Dotterel:   This bird is larger and a complete black crown.  Its band is not Y-shaped. The legs are red.  The upperparts are brown.

Red-necked Stint:  This species is smaller, streaked brown and should not be confused.