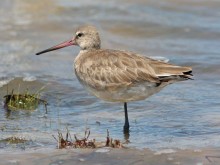 L. l. melanuroides (The sub-species that is found in Australia)

The Black-tailed Godwit is a large lightly streaked brown bird, with long legs and a long straight bicoloured bill.  It is seen feeding by pushing its bill deep into the mud or wading belly deep in water hunting for food.  Usually found in small to medium sized groups.  Black and white tail.

Non-breeding:  This plumage is an almost even brown, though there are faint pale edges to the feathers.  The white supercilium is distinct but stops in front of the eye.  The bill is bicoloured pink and black.  The most diagnostic features of this bird can be seen in flight, the clear white wing bar , which is missing in the Bar-tailed Godwit and the marked black and white tail.  The rump is white whilst the bulk of the tail is black.

Breeding:  The back and wings are reddish-brown. The face, neck and breast are chestnut leading to white on the underbelly.  The flanks can have brown barring or blotches.  The distinctive wing bar and tail remains as the non-breeding birds.

Juvenile:  Similar to adult non-breeding plumage, though seem to have a streaking to the crown.  Buff wash through upperparts.

Found all around the Australian coast but by far the north of Australia is the stronghold of this species.  It is found in areas of soft mud so can be located in fresh and brackish waters, such as swamps and lagoons

Black-tailed Godwits leave our shores during March and April for their breeding grounds in eastern Siberia and Alaska.  They return to us in August and September.  Some birds over-winter in Australia

Breeds in the Arctic from northern Europe, through central Asia.  It usually reaches the breeding grounds in May

There may be over 80,000 birds in Australia over the summer months but most of these are found in the far north.

Asian Dowitcher:          This is a very rare visitor to Australia, but it is worth looking out for in a flock of godwits.  It is slightly smaller with a straight black bill.  It stands with its bill pointing downwards like a snipe.