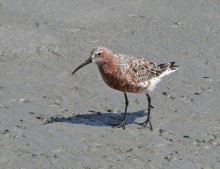 This small wader is characterised by its distinctive down-turned bill.  It is usually seen feeding belly deep at the water’s edge, bobbing up and down like an old fashioned oil derrick.

Non-breeding: The overall colour of the upperparts plumage is grey-brown, but the individual feathers have a thin pale fringe and dark centre to them.  The underparts are pale with a streaked grey wash across the breast.  There is a distinct black eye-stripe with white above this going behind the eye.  The bill and legs are black.  The crown is greyish.
Breeding:  The breeding plumage is a deep chestnut-red that covers the head, neck, breast down to mottled belly and white vent.  The upperparts are brown with individual feather bordered with chestnut.  The chin is white.
Juvenile:  Very similar to the non-breeding plumage, though the margins of the feathers on the shoulders and upper wings have buff margins giving a more distinct pattern to the feathers.

This bird is found all around the Australian coast where there is suitable habitat.  It likes mudflats, estuaries, lagoons near to the coast as well as man-made areas such as sewage works.  Less often in the inland when there has been sufficient rain.

The Curlew Sandpiper leaves Australia in April to breed in northern Russia.  Returning to our shores in August and September.

This species breeds in the high Arctic of Siberian Russia.  The nest is usually in a scrape or hollow, with a little lining.  Four eggs are laid.  The chicks are self-sufficient on hatching.

This is a common bird during the summer months with over 180,000 birds thought to be in Australia.
East Asian-Australasian Flyway Population:  about  180,000.

Because of its distinctive down-curved bill should not confused with any other species, but:
Red Knot:  Slightly bigger than the Curlew Sandpiper but has similar plumages both breeding and non-breeding when the bill is not visible.
Red-necked Stint:  Very small wader that is busy like the Curlew Sandpiper, but its small size means that it cannot be mistaken.