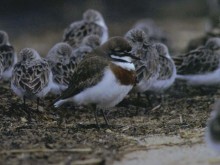 Non-breeding:  The upperparts are a uniform grey brown, though very narrow boarders might be seen on the edges of the feathers.  The underparts are white with an incomplete collar of grey brown extending down the neck.  The forehead is off-white.  The is a black line extending from the black bill to beyond the eye, there is also a white line above this.  The belly through to the vent is white.  There is a very narrow white wingbar seen in flight.
Breeding:  Has a double band across the breast.  The upper one is narrower and black, whilst the lower one is broader and chestnut.  The head, neck, back and wings are grey-brown and the tail dark.  The underparts are white.  Female is duller.
Juvenile:  Similar to the non-breeding plumage.  Pale tips to the feathers of the back and neck can be seen in fresh plumage.  The lines above the eye are more distinct.

The Double-banded Plover is found on the eastern and southern coasts of Australia.  It inhabits many habitats salt- and freshwater areas such as coasts, estuaries, lagoons, saltmarsh, grasslands plus shingle and gravel areas.

The Double-banded Plover is the only Australian wader that migrates east to west.  It arrives here in late March from New Zealand leaving in August.  There is an inter-island migration within New Zealand.

This species breeds from September to December, in the high-country of New Zealand.  A scrape is made in the gravel beds of streams, which is then lined with small pebbles and plant material to varying degrees.  The three eggs are incubated by both parents.

The total population of this species is about 12,500 of which up to 5,500 birds will winter in Australia.