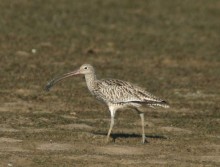 The largest wader not only in our area but also in the world.  It’s extremely long down-curved bill makes it so distinctive.

Non-breeding:  Its upperparts are pale buff or rufous with dark centres to the feathers of the back and shoulders giving a streaked appearance.  The head and neck feathers are more finely streaked.  The underparts are paler but still with the streaking becoming less marked lower on the belly.  The bill is extremely long and down-curved, it is black though slightly flesh coloured at the base. Also the bill of the female is slightly longer than the female.  The legs are dull blue-grey.

Breeding:  Similar to the non-breeding plumage but the upper feathers have a rufous colouration on their edges giving a sharper and generally browner look to the bird.

Juvenile:  Similar to the non-breeding plumage but the feathers of the upperparts have a pale buff edge, giving a paler look than that of the adult.

Found all around Australia where there are large mudflats, estuaries, coastal lagoons and inlets, often near areas of sea-grasses.  Can be found on sandy beaches.  When feeding usually seen singly in a territory.  Some birds we see travel on to New Zealand. 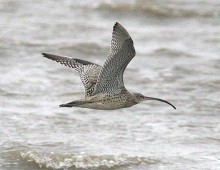 The Eastern Curlew leaves Australia for northern Russia, Kamchatka and Alaska in March and through April.  They return to our shores during August and September.  Interestingly a large percentage of Curlew (30%) stay in Australia during the breeding season.

Breeds in the Arctic in north eastern China, Russia and Alaska.

Though seemingly common in south eastern Queensland 90% of the world’s population of over 30,000 birds occurs in Moreton Bay and the Great Sandy Strait.

Whimbrel: This large wader is not as massive as the Eastern Curlew but because of the down-curved is confused with the Eastern Curlew.  However, the bill is only two to three times the length of the head.  The top of the head of the Whimbrel is a distinctive crown, and the brown of its back runs right down the back.

Eurasian Curlew:  Very,very rare vagrant to Australia, but with its white rump and underparts it should be easy seen in flocks of Curlew.