What is a Wader? 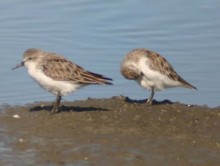 WADERS (Sandpipers, Plovers, and other Shorebirds such as Oystercatchers are collectively known as waders) comprise 10% of Australia’s bird species. They are so unobtrusive, so keenly adapted to their environment, that many people hardly give them a second glance. Most species are migrants from northern China, Mongolia, Japan, Alaska and Siberia. In these regions, a brief opportunity for breeding arises when the snow melts. At this time,insect-life, a food source for chicks, is abundant.

AS AUTUMN APPROACHES, the birds migrate southward. They travel as far as 13000 km, arriving to spend the southern summer on our shores. The smallest of these birds have bodies no larger than a hen’s egg, yet they still manage the journey. About 2 million waders migrate to Australia. The south-east corner of the Gulf of Carpentaria in Queensland is one of the most significant sites in the world for waders. Moreton Bay is also internationally recognized, with more than 40,000 waders arriving during spring and summer. 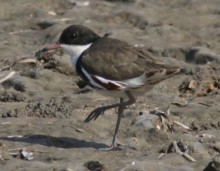 Red-kneed Dotterel, one of our resident waders © 2010 QWSG

THERE ARE numerous threats to waders in Australia and in other countries of the flyway. In many parts of South-east Asia the birds are hunted and there is widespread habitat loss through coastal reclamation. In Queensland, there is inadequate protection of roost and feeding sites and threats from pollution.

There are international treaties aimed at protecting migratory waders. For example, the Ramsar Convention encourages member countries to conserve and sustainably manage wetlands. Within Queensland, Moreton Bay, Bowling Green Bay (near Townsville), Currawinya Lakes, Shoalwater and Corrio Bays and Great Sandy Strait (incl. Great Sandy Strait, Tin Can Bay, and Tin Can Bay inlet) are listed as Ramsar sites. Wader Study Groups in Australia are working towards the protection of waders by providing scientific information, and advocating both for the preservation and wise management of their habitat.