Where possible we identify the sex of each bird we catch, in breeding plumage this is often quite easy, but for most of the time we rely on the measurements as many species are sexually dimorphic with females, often larger than males. For example, in Bar-tailed Godwits, if the bill is greater than 100mm it is almost certainly a female, less than 100mm it is almost certainly a male.

It is also important to age birds as this gives us an indication of how successful their breeding season was. For a bird that nests in places as remote as the Arctic tundra this is often the only available way of monitoring how well their breeding season was. While it may not be an exact reflection on survival of juveniles it does at least provide a consistent comparison between years. 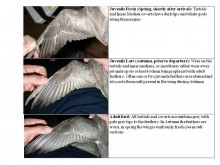 Juvenile birds often have buff spots or edges to their feathers which makes them easy to identify when they are in fresh plumage. However, as many of our shorebirds are breeding in the high Arctic,  their feather are often worn by the time they arrive, after a migration of some 9,000km. Those obvious juvenile identification features are therefore often gone by the time the birds arrive and it is only by catching and looking at the birds closely that we can really age them accurately. 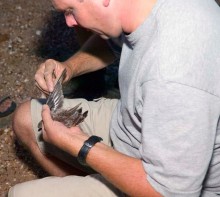 Because of this we use moult in the wing feathers to age most birds. Most birds replace their flight feathers each year to renew them as they get worn, this is particularly important for migratory birds. The adults arrive in Queensland having flown north on fresh feathers and then returned on the same feathers, which by this time are in very poor condition. They therefore moult as soon as they arrive in Australia. Juveniles have only completed a one way journey on their feathers, so they are in better condition. They moult later in the non breeding season and as a result we can accurately age birds based on feather wear and the timing of their moult.