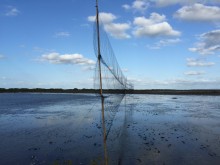 It has been just over two years since the group caught birds at Geoff Skinner Reserve at Wellington Point and almost as long since mist-nets were used to catch shorebirds, with cannon netting being the preferred method.

A quick visit to the site on the morning tide was encouraging with several hundred Bar-tailed Godwit present on the water in front of the hide along with at least 200 Eastern-curlew. Also of interest was a large mixed tern flock, terns are something the group has been keen to start leg flagging for some time now but other activities always seem to get in the way.

Based on this, the team assembled at 4pm to set nets to catch birds on the evening tide, with the high tide due at 9pm. None 18m wader nets were set across the area of open water and birds began arriving at 6pm and settling down to roost on the far side of the nets. Unfortunately the wind also began to increase which meant the nets, although invisible in the dark would be audible with the wind whistling through them which was unfortunate luck.

At just after 7pm the team started to gently move the birds around the site to encourage them to fly from one side of the water body to the other, hopefully with some birds being caught in the nets. We made a modest catch of birds at 7:30pm with a further small catch of returning birds at 8pm.

With a small catch all birds were measured and weighed and one Gull-billed tern was also caught, which is QWSG’s first leg flagged tern, so overall a good result and a good night given the conditions. One Bar-tailed Godwit was a recapture, originally banded at Manly marina in January 2013.