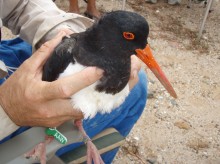 The original purpose of Sunday was to retrieve more geolocators from the Grey-tailed Tattlers roosting at Manly. However, we’re on a run of very high tides and following damage to the bund walls in last year’s storms the roost was completely inundated with water rushing in through the breaches and there we’re no tattlers seen in the reconnaissance on Saturday. A few godwit and curlew stayed around with a flock of oystercatchers until the water level caused even them to abandon and head north towards the port of Brisbane.

Manly as an artificial roost with a maintained water level has a critical role on the huge tides as one of the few sites available for roosting. The wall breaches, increasing disturbance on the site and general disrepair of the fencing allowing easier access all demonstrate that this really important site locally is under major threat.

On the bright side there were several hundred small waders, mainly Sharp tailed Sandpiper and Red necked Stint sheltering in the grass near the marina so we decided to go ahead with the catch, targeting small shorebirds and return in a few weeks time to try for tattler again.

As usual we set two nets on the western shore and then waiting for the tide. Unfortunately even less birds came into roost than the previous day, presumably as they have had several days of being unable to remain on site for the high tide and moved elsewhere until the tide heights decrease. However, eventually we had a small group of Sharp tailed Sandpiper and about 30 Pied Oystercatcher in the catching area so took a catch at 12:30.

The net didn’t fire well, it looked as if one of the cartridges didn’t fire properly which slowed the net down allowing a lot of birds an opportunity to fly out from underneath before the net settled and the catch ended up being 12 Pied Oystercatcher and 3 Sharp tailed Sandpiper.

Two Pied Oystercatcher recaptures were present, one three years old and one, which had lost its leg flag and only had a metal band that was 5 years old.

It was a long day for such a small catch so thanks to everyone who attended for keeping with it and maintaining a sense of humour throughout the day. We don’t catch that many oystercatchers so it was actually very useful to get a small catch of them and put some more leg flagged birds out there to monitor.