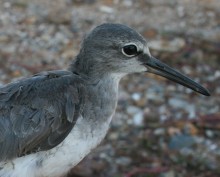 The tides looked perfect this weekend for our catch at Toorbul. The reccie on Saturday showed a lot of birds arriving at the roost some three hours ahead of the high tide and of particular interest was a large whimbrel flock that arrived very early to the roost and immediately moving well above the waterline suggesting a chance of an early whimbrel catch. As a result the decision was made to set two nets, the intention of the first was to make a very early Whimbrel catch, followed by a later and more usual catch of Bar-tailed godwit and Great Knot just before high tide.

Sunday morning saw a team of 20 arrive at 6am to set the nets, and everything was ready to go by 9am. At 1030am the first Whimbrel arrived and unlike the previous day stayed on the waterline. Eventually there were enough present to twinkle gently to the net, along with quite a lot of godwit so we began moving them towards the first net. As with all well laid plans, the Whimbrel had their own game plan which didn’t involve being moved anywhere near the nets and they immediately moved a few hundred metres down the shore to join the flock of Curlew and refused to have anything to do with us.

By this time a lot of Great Knot and Tattler had joined an already large Godwit flock so we changed tack and started moving the flock towards the second net. Without the Whimbrel making life difficult the twinkling was very easy with the whole flock walking slowly to the front of the second net at which point we just had to wait for the tide to move them up the beach.

The day was quite hot so we didn’t want to catch too many birds and at 11:15 it looked like we had approximately 200 mixed birds, mainly Bar-tailed Godwit and Great Knot in the catching area so took the catch. The total catch was 175 birds as per the table below, after all the Whimbrel shenanigans it did include 1 whimbrel!:

All the retraps had been banded at Toorbul the previous season so no longevity records or interesting movements. Having a relatively small catch did give us an opportunity to weigh and measure almost the entire catch which gives us an opportunity to compare weights to last year. As always thanks to everyone who attended for a day of hard work and thanks to Stephen and Alan for spending their evening helping me clean down all the equipment ready for next time.