Queensland Wader Study Group has undertaken a number of surveys counting waders on high tide roosts along almost the entire Queensland coast.  Surveys have been undertaken since the early 1990s.  These surveys have been funded by a wide range of agencies, including the Queensland Department of Environment and Resource Management, Burnett-Mary Regional Group, Natural Heritage Trust and WWF Australia.  The surveys we have conducted to date are listed below, see our downloads page for copies of those reports. 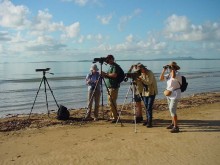 QWSG undertake regular surveys of different parts of the Queensland coast that have large wader populations.  These surveys vary widely in the challenges surveyors face.  They are open to people with an interest and knowledge of wader biology and field identification.  Participants in surveys usually need to have a telescope and be moderately fit.  Most surveys require some walking or boat travel to get to the counting site.  People experienced in wader identification are especially appreciated.  Surveyors are allocated one or more roosts to count each day and work in groups of 2 – 3, with one person counting and the other recording the data onto a count sheet.  QWSG usually provides some reimbursement of fuel or other travel expenses for surveys more than 100 km from the counter’s home.