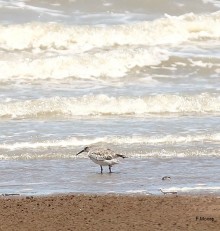 QWSG aims to undertake a survey of the high tide shorebird roosts in the Mackay region every two years.  As the usual organizer was away on holidays (thanks Linda !) it was apparent that the job was mine.  Luckily, Linda is very organized and so was able to provide the necessary details before she left for her trip to South Africa.  We planned to survey 67 roosts and wetlands between Repulse Bay near Airlie Beach and Cape Palmerstone, south of Sarina.  This is the normal survey region that has been completed each time.  We were lucky with the weather and had all the boat trips go ahead as planned.  But it was still disappointing to miss out on 11 roosts that were not counted on the Sand Bay and Ince Bay trips.  The methods and sites for these 2 areas will need to be reviewed before the next comprehensive survey.  The survey was made over 3 days – 16 to 18 November 2012.

The site with the second highest count of waders was Dudgeon Point, north of Hay Point.  The future of Dudgeon Point roosts for waders is doubtful as the Queensland Government’s plan is to develop coal terminals on this peninsular. This survey found 980 Greater Sand Plovers (1.24% for the flyway population).  While the Hay Point Master Plan intends to avoid the claypan area to protect shorebird roosting (Draft Final Port of Hay Point Ten Year Development Master Plan), this will not work as it is not where the shorebirds roost and does not provide the type of habitat for the species using the Point.  The recently released waterbird population estimates (WPE5 – Wetlands International 2012 – wpe.wetlands.org) reduced the flyway population of Greater Sand Plover from 110,000 to 79,000, which shows the species has declined by 31% in the last five years.  Refer to the following web site for the details of the planned Dudgeon Pt coal terminals. – http://www.nqbp.com.au/wp-content/uploads/2012/10/Draft-Final-Port-of-Hay-Point-Ten-Year-Development-Master-Plan.pdf

It was good to meet up with local counters in the region during the survey.  We encourage local counters to visit as many of the roosts they can and send in the counts to Linda.  In particular, we hope that Marlis Schoeb can count Nell’s Beach, Sand Bay via land access in the future.  It was also an opportunity to improve on the GIS mapping of roosts in the region that is maintained by Reef Catchments natural resource management group.  Thank you to Kerri Woodcock for her support in providing us with the maps to take out in the field.  Once again thank you to Jim Ryman for providing his services and boat to take the team out to Bakers Creek, McEwan’s Beach and Dunrock sites.  The accommodation at Illawong Beach Resort was perfect and the helpfulness of the staff at the Duke of Edinburg Hotel at Walkerston was appreciated.  Thank you also to Brenda and Deirdre for their assistance with logistics during the survey.

Disturbance was recorded at 10 sites.  The types of disturbance recorded were dogs off-leash, people walking, jet skis, loud music, motor bikes, fishers and boats.  A number of beaches are being targeted by Reef Catchments and the Mackay City Council and the survey indicates that this is a very urgent issue if the sites are to continue to be used by the birds.

Total birds: 26,059 of 82 species of waterbird, water-dependent raptor and shorebirds

Total shorebirds: 16,568 of 32 species.  This comprised 21 migratory species and 11 resident species, which is the highest number of shorebird species for any of the surveys.

The region is internationally significant for 6 species (> 1% flyway population) based on the current survey results.

Special thanks to land owners

The participants for this survey