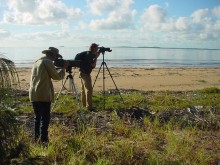 Most bird watching clubs have a code of conduct to ensure members enjoy their day while at the same time respecting the rights of the birds, the environment and other people, particularly the landowners.  Above all, the welfare of the birds is paramount and every effort should be made to avoid disturbing them.  This is particularly important in the period just prior to migration when it is critical that the birds conserve their energy.

In Australia, most wader habitat is found in coastal areas and is generally freely accessible by the public.  However, it may be appropriate to seek permission to enter from a relevant government agency.  Also, private land, including Aboriginal land, should not be entered without the owner’s permission.  It is important to leave gates the way you find them.

Sooner or later while watching waders, you will be approached by a curious onlooker wanting to know what you are doing.  Take the opportunity to tell them a little bit about waders, particularly the phenomenal migratory journeys they undertake to and from the breeding grounds each year.  Let them have a look through your scope.  By spending just a little time in this way, you are playing an important part in educating the community about the wonder of waders and in so doing, contributing to their conservation.