QWSG also monitor resident shorebirds as well as the migratory species. Of particular interest for us at the moment is the Bush Stone-curlew. As a species we are fortunate enough to have a healthy and apparently growing population in Moreton Bay, particularly on the Moreton Bay Islands. Sadly this trend is not the normal case elsewhere in Australia with the species listed as threatened or vulnerable over most of Southern Australia. The species does seem to holding its own in Northern Australia however with good populations in Northern Queensland and the Northern Territory.

As a group we are looking in detail at the Bush Stone-curlews on Moreton Bay islands to understand information about their basic behaviour and biology with most of our work focused on Coochiemudlo Island, with additional monitoring on the other islands in the South of the Bay. This at least provides some baseline information on what healthy populations do and which can be used comparatively in other areas and studies. It also helps locally in understanding the biology of the birds and what threats they face so the various local management plans for the species and its habitat can be refined as more knowledge is gained from these long term monitoring projects

Redland City Council has organised counts of  the number of birds on Coochiemudlo every February since 1997 and their data clearly shows an increase in numbers over time. This has led to questions about how many birds there really are, where the offspring go when they fledge, do the birds stay on the island all year and many other questions.

To try and answer these questions members of the QWSG have started counting the numbers monthly, to see if there are different numbers of birds at different times of the year. We also record productivity for nests by, wherever possible recording the number of nestlings hatched and reared from as many breeding attempts as we can get information on.

We also regularly visit the island, and other locations in Moreton Bay to catch, measure, weigh and put leg flags on individual birds. This allows us to build up life histories on individuals and also build up patterns of local movements and dispersal of birds away from the island. Initial indication suggest that while breeding birds are very local in their behaviour and movements, juveniles do regularly disperse and that the island of Coochiemudlo may be acting as a source of birds which feed continually into mainland populations around South East Queensland.

Over time we will be posting more information onto these pages showing the results of this study, as we start to analyse and write up the data that is being collected. If you see a banded Bush Stone-curlew, particularly one with a green leg flag we’d love to hear from you, please contact our Leg Flag Coordinator .Have a look at our Leg Flag page to find out more about the colours used and the codes as well as finding out what information we’d like you to include with your sighting, if you can.

If you would like to let us know of a breeding record for Stone Curlews (when and where they nested, whether they were successful or not and if so  how many young they hatched, how many they reared to fully grown) we’d be grateful to recieve them and will include that information in our database. You can report this sort of information to Jon Coleman 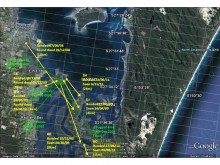 The following report written by David Milton, Jon Coleman and Stephen Macdonald summarise what we know so far about the Bush Stone-curlews on the Moreton Bay Islands.

The Bush Stone-curlew Burhinus grallarius is one of 10 species of Stone-curlew of the family Burhinidae found world-wide.  It is found in all states of Australia, but is most common in coastal Queensland, Northern Territory and northern Western Australia.  In New South Wales, Victoria and South Australia they are threatened with extinction and very rare.
The Queensland Wader Study Group have been surveying Bush Stone-curlew populations on Coochiemudlo Island since 2009.  Other southern Moreton Bay islands have also been visited to count and capture birds (Figure 1).  On Coochiemudlo Is, at least two QWSG members cycle around the island each month counting Bush Stone-curlews and recording the locations that each bird is sighted.  Since 2008, the group has also been catching birds, putting individually-coded green tags on their right upper leg (tibia) and taking a number of measurements (Figures 2 and 3).  These leg tags can be used to recognise each bird.  By resighting them a number of times, a picture can be developed of the size of the area each bird uses.  It can also be used to estimate the annual survival rates of the Bush Stone-curlew population on Coochiemudlo Island.

Figure 2: Banding a Bush Stone-curlew with a metal ring on its lower left leg.

Bush Stone-curlew are active at night (nocturnal) and so the best time to survey for them is a dusk when they first become active.  Redlands City Council has organised an annual Bush Stone-curlew count each February since 1997 (Figure 4).  This survey of the whole island is made by locals and interested people from the mainland on the evening of the second Saturday in February.  During the surveys, teams of volunteers are allocated a small section of Coochiemudlo Is to survey and count any Bush Stone-curlew sighted.  The location of each bird is also marked on a map of their survey area.

Figure 4:  The total count of Bush Stone-curlew and the number of juveniles counted each February during the annual Coochie Curlew Count organised by the Redlands City Council.

The figure shows that the count of Bush Stone-curlew on Coochiemudlo Is has been stable since 2007 at around 200 birds (Figure 4).  The number of juveniles counted has fluctuated between 10 and 40 birds each year.  There appears to be no clear trend in either the total count of the number of juveniles sighted.
In contrast, the QWSG monthly count surveys are made during the morning when the Bush Stone-curlew are mostly asleep.  Hence, many of the birds may not be detected as they may be in backyards or hidden among bushes.  However, these surveys are made each month of the year so provide a more detailed comparison of the seasonal and interannual changes in Bush Stone-curlew count on Coochiemudlo Is (Figure 5).  The day-time count varies between 60 and 120 birds, with the highest counts usually made in the winter (June – August) when birds form large loose groups and are easier to find during the day. Lower counts were made during spring when the adults are nesting and less visible as they sit on eggs or attend chicks (Figure 5).  The QWSG survey also does not show any trend in the count of birds.
Nesting
All nesting attempts seen during monthly surveys were recorded, including the number of eggs or chicks and their age.  Pairs at the same place seen with older chicks the next month were assumed to be the same pair.  Bush Stone-curlew nested from August to January each year, with most nesting occurring in September to November.  Some pairs renested if their first nest failed because of predation.  Local residents have told us that some pairs attempted to nest up to five times in a season.  This is very unusual and most pairs only nest once.  If chicks were successfully raised, the parents can spend the rest year tending and protecting the juvenile birds and teaching them how to find food.  Adults chase off their juveniles from the previous year before they make their next nest.  These one-year old birds are probably old enough to nest themselves and must find a new territory and mate.
The average number of eggs hatched per nest alsovaried between years (Figure 6) and was lowest in 2011 when south-east Queensland had heavy rains during the nesting season.  On average, each nest hatched about 1.4 eggs.  There was a slight downward trend in the number of eggs hatched, but this was not statistically significant.

Figure 5:  The monthly daytime count of Bush Stone-curlew made by QWSG members on Coochiemudlo Is since 2009.

Figure 7: The annual average ± standard error number of chicks that fledged from Bush Stone-curlew nests on Coochiemudlo Island.  The red line shows the overall long term trend in the average.
There was an average of 1 chick fledged from each nest (Figure 7) and this was stable over the study period.  Again, the number of fledglings varied between years and was lowest in 2011.  The number of fledglings also varied between nests more in some years with 2015 being the most variable.  This meant that there were more nests that produced two fledglings or no fledglings that year compared with other years.

Bush Stone-curlew have been caught and banded on Coochiemudlo Island with individually-coded leg tags (flags) since 2008.  Several of these birds have moved to other islands in Moreton Bay and to the mainland.  On the mainland, birds have been seen from Cleveland to Redland Bay.  Birds that have dispersed to the islands have been seen mostly on Macleay Island, although one was seen on Karagarra Island.  Many of these birds that have dispersed were one-year old birds that had probably been chased from their parents’ territory.  As the population on Coochiemudlo Island appears stable (Figures 4 & 5), these dispersing birds are probably looking for new territories and mates.
Birds also move around quite widely on Coochiemudlo Island.  Some birds moved between the southern and northern end of the island between surveys.  Other birds remained in the one small area for several months before relocating to a different part of the island.  Distances moved varied from 100s m to over 0.75km.  The movement patterns need to be examined in more detail to ascertain if there is any consistency among different birds in terms of the season or reason for possibly relocating.

Figure 8: The movements of Bush Stone-curlew banded on Coochiemudlo Island between 2008 and 2011.

Birds banded and resighted can be used to get an estimate of the annual survival rates.  The resighting of banded birds during monthly surveys can be used to estimate annual survival rates. Formal analysis of survival rates has not been undertaken yet as it tends to be more accurate with data collected over > 10 years.  However, we provide some preliminary data to show what we have learnt so far.
A total of 133 Bush Stone-curlew have been banded on Coochiemudlo Island since 2008.  From these birds, there have been 770 resightings until December 2016. Of these 133 banded birds, we know of 10 deaths: three by cars, one euthanized after injury, one eaten by a carpet snake and five of unknown causes. We have also had a number of fatality reports from the public including birds killed by cars, dogs and vandalism.  A few appear to also have died from apparent sickness or starvation possibly caused by parasites or poisoning.
Birds get fed supplementary food and provided with water at a number of locations on Coochiemudlo Island.  This extra food has an unknown effect on their survival and condition as the quality of food provided varies.  Provision of drinking water should have a positive effect as there is limited surface water available on the island.  This would require birds to obtain most of their moisture requirements from their diet under natural conditions.  Residents have reported numerous instances of Bush Stone-curlew drinking and bathing in water baths provided during hot weather.

Figure 9: Picture of an adult Bush Stone-curlew sitting beside its mate that was killed by a car.