Several years ago QWSG used satellite transmitters to study the migration of Eastern Curlews. Although this provided detailed information for that species the technology at that time meant that studying smaller species in the same way was not possible, due to the weight and size of the devices. Now, technology has advanced significantly and transmitters and locators are widely available for a range of species and weigh as little as 1.1grammes and are smaller than a 5 cent coin. This now means that the movements and migration of much smaller species of bird can now be studied in great detail.

In the 2011/2012 wader season QWSG, partnering with  the Wild Bird Society of Japan Chiba and Non Profit Organization Yachou Chibawith along with a small number of other Japanese stakeholders placed 21 geolocators on Grey-tailed Tattlers and a further 20 in 2013 to obtain detailed information on the migration strategies, stopover locations and breeding localities for  that species. As with other projects of this nature (the Ruddy Turnstone project in Victoria and South Australia for instance) the devices are small enough and light enough to be glued onto the leg flag where they capture data about the birds locations at regular intervals and we can then remove the device from the leg-flag when the bird returns.

Given the well publicised declines in a number of species recently, this type of data is becoming increasingly important in trying to understand the changes we are seeing and more importantly addressing them.

Of the birds banded we have recovered 3 to date. The geolocators were supplied by the British Antarctic Survey in the UK and more recently from Migrate Technology also in the UK and, you can read about successes with this technology, on a range of species at the following link. The project is a joint project between QWSG, Wild Bird Society of Japan Chiba and Non Profit Organization Yachou Chiba with those parties and the Port of Brisbane Corporation being the major financial providers.

We have managed to capture three birds and retrieve the geolocators with more catches planned this season.

the birds caught did very different things on their northward migration, A6 went from Brisbane, to the Gulf, then the Philippines, then Japan staging in all of those locations en route. From Japan the bird  then headed up to the Kamchatka peninsular to Breed before commencign its southward migration.

B3, a Japanese banded bird, caught at Manly and fitted with a geolocator took a much more direct route, travelling from Brisbane to Japan where it staged before heading up onto the Kamchatka peninsular to breed.

C5 also took a direct route but appeared to stop off mid pacific on both Northward and Southward migration. The northward tracks recorded before the battery went flat on the device appear to show that the birds migration route is remarkably consistent between seasons.

Keep an eye on this page for more details as we recapture the birds and analyse the data. 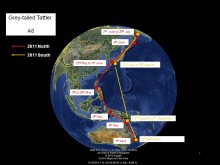 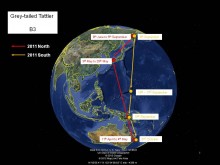 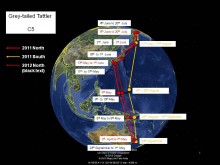 In 2017, we tracked our first Pacific Golden-plover with Satellite technology, see here to learn more about the project and see where the birds have been recorded. This has been followed by satellite tracking of Far-Eastern Curlew and Whimbrel in 2018 which you can learn about here.

The 2018/2019 season has seen the project extended further with more Far-Eastern Curlew and Whimbrel fitted with PTTs and two new species, Bar-tailed Godwit and Black-tailed Godwit added to the program. Results for the 2018/2019 tracking season can be seen Here