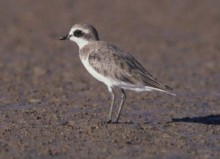 Non-breeding:   The upperparts  are a grey-brown, apart from the forehead and supercilium which are white, plus the lores and ear coverts which are a darker grey-brown.  The underparts are white with an incomplete grey-brown breast bar.  The black bill is about the length of the distance between the bill base and the rear of the eye with a slight bulge at the end.  The legs are olive-brown.
Breeding:  A strikingly different plumage to the non-breeding colouration.  The crown, nape, hindneck, sides of neck, mantle and scapulars brown leading to the breast, upper belly and flanks that are chestnut.  The chin and throat are white with a black line above that expands into a band that broadens through the eye, to the lores and over the forehead.  The forehead is white.  The underparts are white.
Juvenile:  Similar to the non-breeding plumage, though for a few months after fledging there is a buffish edge to the upperparts feathers.

Found all around the Australian coast but more common along the Queensland coast into New South Wales.  The Lesser Sand Plover is almost exclusively coastal in its occurrence.  It feeds on mudflats and roosts on sandy beaches and spits.

This migratory wader leaves our shores in March and early April, returning in September.

The Lesser Sand Plover has distinct breeding areas in Asia.  The two subspecies that come to Australia are found in north-eastern Siberia.  C. m. mongolus breeds in  far east of Arctic Siberia.  C. m. stegmanni is found breeding on the Kamchatka Peninsula and inland Siberia.

The Australian population has been calculated to be about 20,000 and considered common.
East Asian-Australasian Flyway Population:  about  60,000.

Greater Sand Plover:  Slightly larger and lighter, with seemingly longer “thighs”, and grey legs.  The bill is longer than the distance between the base of the bill and the rear of the eye and has a heavier look.  The chestnut breast of the breeding plumage is not as deep as the Lesser.
Double-banded Plover:  This bird has a finer bill, a more upright stance and is darker above.  There is a hint of the double band on the breast in some birds.  In the breeding plumage no mis-identification because of the double banding.
Red-capped Plover:  The Red-cap is smaller than the Sand Plovers and the chestnut cap is distinctive.