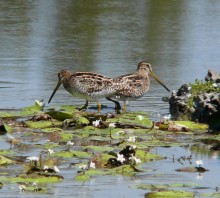 Adult Plumage:  The crown, nape, lores and ear coverts are dark brown, there is a central pale stripe on the crown and a pale buff supercilium.  The rest of the upperparts are dark brown with the feathers are streaked and scalloped with buff.  The chin, throat and breast are buff with strong brown markings.  The flanks, belly and vent are buff, the flanks having brown barring.  The bill is straight, long and brown with a darker tip.  The legs are olive-green.
Juvenile:  Similar to the adult plumage.

Found in the east of Australia from north Queensland, through New South Wales, Victoria and into Tasmania.  It in habitats freshwater wetlands along rivers, around lakes and ponds as well as swampy ground.  It can also be found in brackish and saline areas.  It likes lush vegetation in which to hide.

This wader has one of the most restricted breeding areas of the world’s Snipe.  It breeds in Japan, on the islands of Hokkaido and Honshu, plus the islands to the north, Sakhalin and southern Kurile islands..

Because of its cryptic plumage and retiring habits this bird can be overlooked very easily.  Also its migratory habits of seeming to be on the move all the time it does not appear in big flocks.  Its population in Japan is estimated at about 37,000 birds, whilst in Australia the number is about 20,000.

The other Snipe species: Pintail Snipe and Swinhoe’s Snipe.  Probably only really distinguishable in the hand.
The distinguishing characteristics show a degree of overlap.