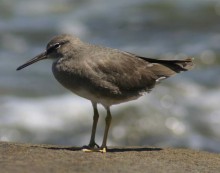 The Wandering Tattler is found singly or in very small numbers on coral cays or rocky shores in Queensland and New South Wales.

This bird usually migrates down the west coast of North America and as far south as Peru.  Amazingly some of the birds migrate across the Pacific and are found throughout the islands of the central  and south-western Pacific.  They have been recorded on Hawaii, French Polynesia, eastern Micronesia, Solomon Islands, Fiji etc.  The birds arrive in late September though this seems to go through until November.  The birds leave April.

This species breed in Alaska and north western Canada, as well as eastern Siberia.

An uncommon visitor to our shores, though a number of birds might be overlooked because of its similarity to the Grey-tailed Tattler.  Its liking of rocky shores could well mean that birds missed on the cays and islands of the Great Barrier Reef.

Grey-tailed Tattler:  This species has paler upperparts.  The supercilium extends well behind the eye.  Both birds like rocks to roost on.