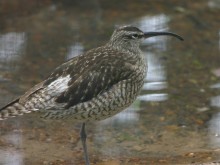 Large wader with long bill and legs, with white rump.

Non-breeding: The crown is brown with a central pale stripe.  There is a white supercilium.  The neck and mantle are brown streaked with black.  The upperparts are brown with black markings.  The chin is pale buff leading into the throat and breast that are buff-white with heavy brown streaking.  the rest of the underparts are white with brown barring.  The bill is over twice as long as the head and down-curved.  The tip is black with the upper mandible shading to grey at the base, whilst the lower mandible shades to pink.  The legs are blue grey and appear almost stocky.

Breeding: Similar to the non-breeding but sharper.

Juvenile: Similar to the non-breeding plumage but darker on the head and the rest of the markings less distinct.

The Whimbrel is usually found in the north of Australia, though small numbers are found in the south.  It inhabits the mudflats of sheltered coasts, rivers and mangrove areas.  It can also bee found on sandy shores and saltflats.  It is well known to roost in mangroves as well as the usual high tide roost sites.

This species leaves Australia in march and April to its breeding grounds in Siberia, returning to Australia in August and September.

The Whimbrel breeds right around the Arctic, but the race that comes to Australia, variegatus, breeds in north-eastern Siberia. 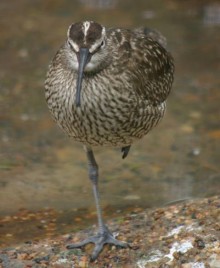 Australian population thought to be about  10,000.
East Asian-Australasian Flyway Population: 55,000.

Eastern Curlew: This bird is huge and at least twice as big as the Whimbrel. Its bill is 4 times the length of its head.  It has no chestnut crown to the top of the head.

Little Curlew: Smaller than the Whimbrel in size and the length of the bill, which is also less down-curved.  Does not have a white rump.  It stands more upright like a Pacific Golden Plover.