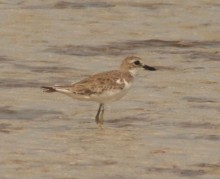 A medium-small wader with grey-brown upperparts and white underparts and a strongish, short bill.

Non-breeding: The upperparts are grey-brown, with a white forehead and supercilium.  The underparts are white with light grey-brown sides.  The bill is black and slightly longer than the distance between the bill base and the rear of the eye.  Legs greyish-green.
The chestnut, black and white head markings make is a striking plumage.  The chestnut extends from the top of the head, over the nape, sides of the head and onto the breast.  The forehead, neck and cheeks are white.  There is a black band from the lores, thickening around the eye and ear coverts.  There is a thin band over the white of the forehead.  The back is grey-brown and the underparts are white.
Juvenile:  Similar to adult non-breeding but upperparts feathers are fringed with white

Found in all states of Australia but commoner in the north.  It is almost entirely found by the coast, usually on sandy or muddy shores where it feeds and roosts.

Greater Sand Plovers leave our shores during March and April for their breeding grounds in the Gobi desert of Mongolia.  They return to us in August and September.

A shallow scrape in the gravel areas of the desert in Mongolia.

The estimated population of this bird in Australia is 75,000, mostly found in the north and more so in the north-west.

Lesser Sand Plover:  Slightly smaller but this is difficult to determine if bird is on its own.  It has a shorter, more slender bill.  The legs appear shorter, particularly the upper part of the leg; this can depend on the stance of the bird.  In breeding plumage it has a broader chestnut breast band.
Double-banded Plover: Slightly smaller than Greater Sand Plover and browner.  Paler brown band on breast might be observed in non-breeding plumage.  Double band in breeding plumage diagnostic for this bird.