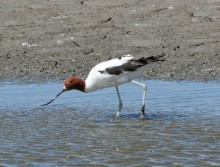 Adult:  The head and neck are chestnut-brown with a degree of white around the eye and at the base of the bill.  The rest of the bird is white except for black on the primaries and secondaries of the wings as well as the shoulders. The bill is black and upturned (more so in the female). The legs are grey and trail well behind the tail.
Juvenile: Similar to the adult plumage but the chestnut-brown is washed out and the black is greyer.

Found most commonly in southern Australia, Western Australia, Southern Australia and Victoria.  It inhabits salty and brackish waters; the ephemeral lakes of the desert areas become home to these birds very quickly.  If the rainfall of the inland areas is very low then the Red-necked Avocets will travel to coastal areas and further north.

A resident bird of Australia, that will move to find wetland areas that arise at a moments notice due to rainfall.  Also the Red-necked Avocet will move to the coast if there are drought conditions in the inland. There seems to be a movement to the interior in the winter and to the coast in the summer, but this will be overridden by rainfall.

As mentioned above this bird will take advantage of rainfall anywhere in the interior.  A shallow scrape in gravel, mud or sand is used to lay the 3 or 4 eggs.

The Australian population is thought to be about 105,000 birds.  So is considered to be common.

The Red-necked Avocet is a distinctive bird though other similar long legged birds are:
Black-winged Stilt:  Slighter than the Avocet and lacks the chestnut head, its bill is straight and has red legs
Banded Stilt:  Has white head and back, its legs and neck are shorter and it lacks the upturned bill.