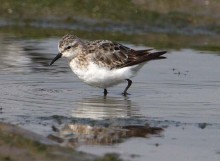 Non-breeding:  The upperparts are grey-brown with individual feathers having a white edge, giving rise to a streaked appearance.  There is a white supercilium.  The throat and chin are white.  The breast and belly are also white but slightly streaked with grey.  The vent is white.  The bill is short, straight and black.  The legs are also short and black.
Breeding: The head, neck and breast are rufous-red streaked with black.  The rest of the underparts are white.  The rest of the upperparts are black with individual feathers are edged with rufous-orange.  The appearance is lighter when the feathers are new as they have an outer edging of white that abrades with time.
Juvenile: Similar to the non-breeding plumage but a browner look.  The feathers of the back are fringed with buffish-orange. 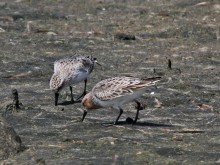 One of Australia’s most common waders.  Found all around Australia in a vast range of wetland habitats, from rocky shores and islands though sandy and muddy beaches to wetlands and pastures.  In fact any area that has water or is near to water.

This bird leaves from the Taimyr Peninsula and the Bering Sea flying south through Japan and Korea arriving in Australia in August and September, returning north in March and April.  Birds recorded in the interior may well be birds in transit on migration.

The Red-necked Stint breeds in the high Arctic.  Breeding from the Taimyr Peninsula to the Bering Sea; occasionally in Alaska.

One of Australia’s most common waders.
East Asian-Australasian Flyway Population:  about  315,000.

Curlew Sandpiper:  This bird is larger and has the very distinctive down-turned bill.
In its chestnut breeding plumage there is no confusion.
Sharp-tailed Sandpiper:  Larger in size and though regularly seen together should not be difficult to separate because of the distinctive feather pattern of the Sharp-tail.
Broad-billed Sandpiper:  Very similar to the Red-necked Stint and flocks should be scanned for the rarer Broad-bill which is slightly larger and has a longer slightly down-curved bill.  The double supercilium is distinctive.
Sanderling:  Much lighter than the Red-necked Stint and larger.  More commonly found on sandy beaches.