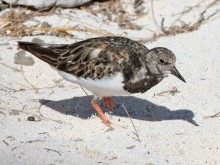 A. i. interpres
A. i. morinella

Non-breeding:  The upperparts are dark brown, with the edges of the feathers being a paler brown giving a mottled appearance.  The head, throat and neck are brown.  The breast shows a black bib, thinning in the mid-line.  The rest of the underparts are white.  The  bill is black, short and slightly upturned.  The legs and feet are bright orange.
Breeding: Male: A bold black and white patterned head.  The head is mainly white, though the crown is streaked with black, there is a black band around the eyes joining across the forehead.  Also there is a band from the ear coverts to under the chin where it meets a broad black band that extends from the chin and throat to the breast.  The back is mottled black and bright chestnut.  The rest of the underparts are white.  The legs are bright orange.
Female: Similar to the male but duller.  The head pattern is less bold and the crown more streaked.
Juvenile: Similar to the adult non-breeding plumage but duller.

Found all around the Australian coast particularly where the shores are rocky, shingle or gravel.  Will be found away from these areas including mudflats.

Arrives in Australia in August and September and progresses down the coasts to the southern states.  It leaves our shores in March and April.  Some birds stay in the north over the winter months.

Breeds circum-polar of the Arctic and around the Scandinavian peninsula.  Usually not far from the shore using a scrape in gravel or shingle.

The estimated population for Australia is about 14,000 birds.
East Asian-Australasian Flyway Population: about  31,000