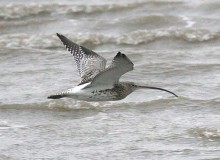 N. a. orientalis (the subspecies likely to occur in Australia)

Australia: Two confirmed records of this bird in Australia: may be more birds in the north and north-west of Australia.

Migrates from temperate Europe, across to Siberia and western China south to southern Europe, Africa and southern and eastern Asia.  A “wrong turn” could result in the bird being seen here.

This species breed in temperate Europe, across to Siberia and western China.

Two confirmed records of this bird in Australia.

Eastern Curlew: This bird does not have the white rump and underparts and has a larger bill. See the species account to compare in-flight images of this species.