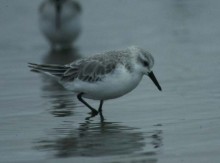 Found most commonly in South Australia, but also is seen in the north west of Western Australia and the Northern Territory.  It is found all around the Australian coast in lesser numbers.  It inhabits the wash zone of sandy beaches running up and down with the waves.

This species breeds in the high Arctic in Canada, Greenland, Spitzbergen and northern Siberia.

The estimated population for the Sanderling is 8,000 birds.
East Asian-Australasian Flyway Population:  about  22,000.

Red-necked Stint:  This bird is smaller than the Sanderling and more colour on the upperparts.  It does not have the white forehead either.
Curlew Sandpiper:  This bird is slightly larger with longer legs and a down-curved bill.  In its breeding plumage there is no difficulty in identification.
Broad-billed Sandpiper:  Although pale this bird has more markings and a double supercilium, plus has a slightly longer down-curved bill.