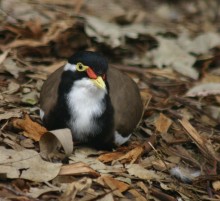 Juvenile:  Similar to the adult plumage but the black areas are browner and the upperparts are mottled because the feathers are fringed with buff.  The wattle is duller.

Found in dry, open areas from grasslands, agricultural areas and semi-arid habitat.  It is found though Southern Western Australia, South Australia, Victoria, Tasmania, New South Wales and south-east Queensland.  It is rarer east of the Dividing Range.  Its range in Western Australia is increasing. 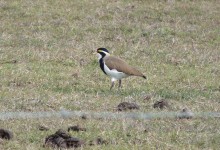 This species is endemic to Australia and non-migratory.  Internal movement is poorly known but is found to group in the non-breeding season.  It will travel if there is a drought to eastern areas.

The nest is a shallow scrape that is lined with grasses and maybe stones.  Usually the 4 eggs are incubated for 28 days.  The birds fledge at about 60 days.  A large percent of the young are predated.  Mostly breeds south of 20ºS.

The estimate population for this species is about 27,000 birds.

Masked Lapwing: This bird is larger, does not have a breast-band.  Its yellow wattle is more noticeable.