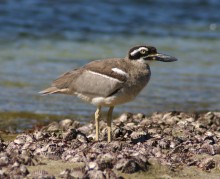 Esacus magnirostris, formerly known as Esacus neglectus, was once grouped with the Australasian species Esacus giganteus but is now recognised as a species in its own right.

This is a large, long-legged solid bird.  It has a thick medium sized bill.  Its plumage and carriage are very distinctive.

Adult:  The upper parts are a distinctive grey-brown, whilst the belly and flanks are white, the breast streaked light brown.  However, it is the head pattern that is most distinctive.  The folded wing shows a white band bordered with black above and below.  The top of the head and the nape are brown, the supercilium extends well behind the eye, then there is a black band from the lores under the eye to the cheeks, under this is a white chin and throat band that has a black moustchial patch.  Added to this is a yellow iris, and the massive yellow based black bill.  The legs are various yellows from cream to straw-yellow.

Found all around the deserted beaches of northern Australia, usually in pairs.  All types of beach are occupied. This species is easily disturbed and there are many areas where this bird is not found.

Resident.  It is probably sedentary.  Once established site faithful .  Almost entirely found by the shore.

The nest is usually a shallow scrape in the sand of a beach. Usually one egg is laid.