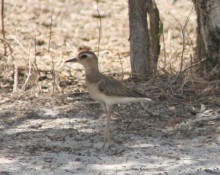 A medium-sized, tall and slender plover.

Non-breeding:  Upperparts are a uniform golden-brown.  The forehead and lores are cream-brown.  The crown of the head is brown giving a dark cap appearance.  The supercilium and sides of the neck are cream.  The ear coverts stand out as they are brown. The underparts from the chin through to the vent are cream, though the breast has a brown wash.  The bill is short and black.  The legs are pale orange.
Breeding:  The head and neck are white.  The rest of the upperparts are golden-brown.  The breast is bright chestnut with a thick black band on its lower edge.  The belly flanks and vent are white.   The female lacks the black breast band and is browner on the head.
Juvenile:  Similar to the non-breeding plumage but buff edging to the feathers on the upperparts gives a mottled appearance.

This bird is found in the open, sparsely vegetated grasslands of northern Australia, particularly in Western Australia, Northern Territory and the Gulf of Carpentaria of Queensland.  It occurs in very small numbers in the other states as a straggler.

The Oriental Plover arrives early in September increasing through October and November.  Its whereabouts once the rains arrive is not well-known, but it is thought that it disperses into the interior.  It leaves for its breeding grounds in March and April.

This species breed in the arid and mountainous area of Mongolia and eastern China.

The estimated population for the Oriental Plover in Australia is about 40,000.
East Asian-Australasian Flyway Population:  about 70,000.

Greater Sand Plover:  The wings do not extend beyond the tail and the legs are shorter.
Pacific Golden Plover:  Similar in size, but is plumper and has shorter legs.  In its breeding plumage there is no difficulty in identification.  The golden tinge to the upperparts is distinctive.