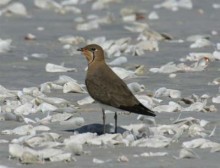 Adult plumage: The upperparts are olive-brown.  The chin and the throat are cream, with a black border.  The lores are black.  The breast is olive-brown grading through orange-buff to cream on the flanks and belly.  The tail is white with black tips and swallow-like in shape.  The bill is short, black with a red base.  The legs are black.
Juvenile:  Similar to the adult plumage, but the feathers of the upperparts  are edged with buff.  Most birds are in the adult plumage by the time they reach Australia.

This species is found in the north of Australia, with its largest concentrations found in the northwest.  It inhabits open grasslands and the muddy flood plains.  It has been observed in the south of the continent but in small numbers.

This bird arrives in northern Australia late in November and December and has nomadic movements whilst here.  It leaves at the end of March and early April.

The Oriental Pratincole breeds from Pakistan in the east through Indian and Sri Lanka, China and Taiwan.  It has also breed in Vietnam, Philippines, Thailand and Burma, plus probably in Mongolia.  It nest in colonies in the banks of rivers. lakes and rice paddies.

The recognised wisdom had a flyway population for this species of 75,000 birds.  However, this was turned upside-down in February of 2004, when an estimated 2.5million birds were recorded at 80 Mile Beach (Anna Plains station), in north Western Australia!!

Australian Pratincole:  This species is more slender, paler and has longer legs.  In flight it has a square tail.