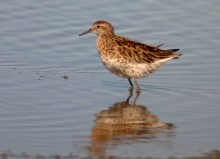 Small wader with a distinctive pattern of brown in its feathers.  Usually seen on wetlands in small groups. 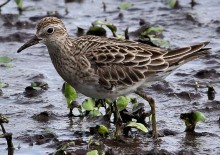 Non-breeding: The feather pattern of a brown feather that is fringed with paler buff.  This gives a scalloped appearance to the bird.  This pattern is to be found on the upperparts.  The crown is chestnut with black streaks.   There is a white supercilium.  The rest of the head and neck are grey-brown streaked with black.  The breast is pale buff with brown speckles.  The rest of the underparts are off-white.  The short bill is black with a greenish base.  The legs are olive green.

Breeding: Similar to the non-breeding plumage but breast has a buff colouration and the markings there are more like chevrons.

Juvenile:  Similar to the non-breeding plumage but sharper.

Found throughout Australia where there is wetland, this can be inland or along muddy foreshores.  It is found all waterways, saltworks and sewerage farms.  There seems to be larger numbers in the south of Australia but numbers will increase in the north during the migration periods.

The Sharpies arrive in the north of Australia in August and spread south through Australia, some of them using the inland waterways.  When they leave in March-April there is a massing of the birds in the Gulf of Carpentaria, though the birds have not been recorded in New Guinea suggesting that they fly north in one big jump.

The Sharp-tailed Sandpiper breeds in the high Arctic from the delta of the Lena River to the Kolyma River.

The population of the Sharp-tailed Sandpiper in Australia is about 140,000.

Pectoral Sandpiper: Very similar.  No chestnut crown, and the cut-off of the breast colour to the under belly lower and more distinct.  The legs are yellower and the bill is more down-curved.

Curlew Sandpiper:   Similar in size, but has a distinctive down-curved bill.  Its red breeding plumage makes sure that there is no confusion.

Red-necked Stint:  A much smaller sized bird which occurs with the Sharpie but should not be mistaken.