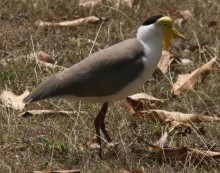 Large, solid  bird with brown, black and white plumage.  It distinctive call soon lets one know that they know you are around.

Adult:  The crown and nape of the head and the breast are black.  The rest of the back is chestnut brown.  The underparts are white.  The Masked Lapwing has distinctive yellow wattles on the side of the face, a yellow bill and a yellow orbital ring.  The legs are a dull red.
Juvenile:  Similar to the adult though the head colour is greyer.  The wattles are smaller and less intense in colour, the legs are greyish.

Commonly found throughout the eastern half of Australia particularly in the south east: a vagrant to south of Western Australia.  It inhabits open areas near to water, because of this it has benefited from man’s development such as playing fields, park land, improved pasture and even the central strip of dual-carriage roads.  Seems to be expanding its range. 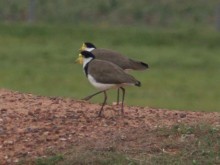 Resident.  Tends to flock in non-breeding period.  No movements over long-distances have been noted.

The nest is a shallow scrape that is lined with twigs and grasses.  3-4 eggs are usually laid in winter and spring.  There is a large loss of eggs and young because of predators and disturbance.

Banded Lapwing: The Banded Lapwing is smaller.  There is a black breast-bar and less noticeable wattle.  The upperparts are a redder browner. In flight there is a white wing-bar.