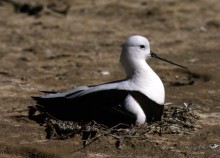 Juvenile:  Similar to the adult but lacks the breast band and there is a grey wash to the head.  The legs are grey.

This species is most commonly found in saline wetlands coastal and inland.  It takes advantage of the ephemeral lakes that occurs after rain.  It is found in Western Australia, South Australia, Victoria and western New South Wales; it does occur as a rare visitor in the rest of New South Wales, Northern Territory and Queensland.

An endemic species that follows the rains, so is an erratic and seasonal mover.  Its numbers will increase if there is a row of wet seasons, with birds moving to coastal areas.

As mentioned this species is an opportunist breeder making the most of wet seasons.  It breeds at the saline inland lakes of Australia, many thousands of birds coming together in huge colonies.  The nest usually has 3 or 4 eggs.  The breeding details are not well known and there are only two breeding records out of Western Australia.  The young birds clump in crèches and then disperse, hopefully before the lakes dry out.

This is Australia’s commonest resident wader with over 200,000 birds being estimated.  (In 1980 at Lake Barlee an abandoned colony was found to have an estimated 179,000 nests!).

Black-winged Stilt:       This bird has a black head and no breast band.

Red-necked Avocet:      The Avocet has a chestnut-brown head and an upturned bill.  The legs are grey.