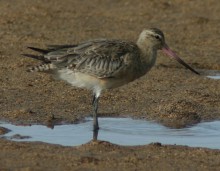 The Bar-tailed Godwit is a large streaked brown bird, with long legs and a long slightly upturned bicoloured bill.  It is seen on the mudflats in groups feeding by pushing its bill deep into the mud.

Non-breeding:  This plumage is grey-brown on the head, neck and upperparts.  There is a dark centre and lighter edge to the feather giving a slightly streaked look.  The underparts are pale buff.  The bill is bi-coloured with pink at the base and blending to black at the tip. The supercilium is white and with  the dark eye-stripe giving rise to an obvious feature for identification.  The legs and feet are dark grey.

The adults take on a rich chestnut-red plumage over the neck, shoulders and underparts.  The upperparts are red-brown with a darker centre to the feathers giving a streaked look.  The black barring on the white of the rump seems to stand out in the breeding plumage.  The bill is bicoloured with pink at the base and blending to black at the tip; the female has a longer bill.

Juvenile:  Similar to adult non-breeding plumage, though seem to have a more strongly streak appearance.

Found all around the Australian coast where there is suitable habitat.  They like large intertidal flats, estuaries, inlets, coastal lagoons plus some man-made wetland areas.

Bar-tailed Godwits leave our shores during March and April for their breeding grounds in eastern Siberia and Alaska.  They return to us in August and September. Some birds over winter in Australia.

Breeds in the high Arctic from northern Europe, through Asia into Alaska.  It usually reaches the breeding grounds in May.

Very common wader found a round Australian coast.  There may be over 185,000 birds during the summer months.

Asian Dowitcher: This is a very rare visitor to Australia, but it is worth looking out for in a flock of Bar-tails.  It is slightly smaller with a straight black bill.  It stands with its bill pointing downwards like a snipe.