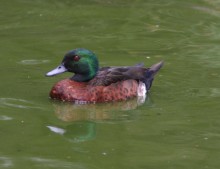 The expansive sand and mudflats in Deception Bay are important feeding grounds for many species of wader, with the area adjacent to the southern section of the Esplanade being the most productive.  This is one of only a few sites in Moreton Bay where Red-necked Avocet are regularly seen, most reliably between June and October; in August 1999, a flock of 501 birds was recorded at the lagoon roost site.  Opportunities also exist to compare Bar-tailed Godwit with Black-tailed Godwit, the latter being most commonly seen here and at Lytton in Moreton Bay.  Another rarity, Asian Dowitcher, has also been recorded at this site.  On the turning tide the best vantage point is at a small park on Esplanade South; you can park here or along the seawall.  Walking onto the mudflats is not recommended, as the substrate is very soft and hazardous in places.