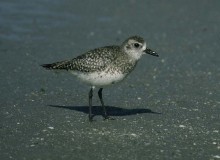 Non-breeding:   The upperparts have a mottled appearance because of the grey-brown feathers are edged with white.  The tertials and wing-coverts are also grey-brown but the feathers are notched with white giving a speckled look.  The chin, throat, sides of the neck and the breast are white blotched with grey-brown.  The bill is black, short with a bulge on the tip.  Legs grey.
Breeding:  Striking black, white and grey plumage.  The supercilium, sides of neckand breast are white, contrasting with the black of the lores, ear, throat, breast and belly
Juvenile:  Similar to adult but upperparts are more heavily spotted.

Found all around Australia, though less common on the eastern coast.  It is almost entirely a coastal bird, feeding on the mud flats and roosting on sandy beaches; with very few observed elsewhere.  Also, does not seem to like the areas the Pacific Golden Plover frequents.

From its breeding grounds north of 65°N the Grey Plover migrates over a vast area to South America, Africa, southern Asia and east Asia.

Breeds north of the 65°N parallel in the tundra from western Russia east through Siberia into Alaska across Canada to Baffin Island.

Australian population is about 12,000 birds.
East Asian-Australasian Flyway Population:  about  125,000.
Nearly all Grey Plover in Australia are female.