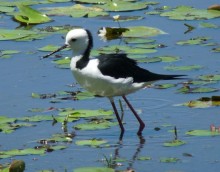 This is a graceful, distinctive medium sized wader.  Its black and white plumage and long, slender red legs made identification easy.  Its warning call might be the first thing you are aware of when approaching these waders.

Adult:  The upperparts are black with a white head and neck, except the nape and back of the head which are black extending down the sides of the neck. The chest and abdomen are white.  The long legs are red.  The bill is straight, long and black.  The underwings seen in flight are black and the legs trail noticeably behind the tail.

Juvenile:  The black of the adult is replaced by a brown black in the juvenile.  The top of the head and an eye patch are a pale grey whilst the neck is white.  The legs are pale pink.

Found throughout Australia except in the driest areas of the interior.  It inhabits most wetlands but does prefer shallow open freshwater areas.  So it can be seen on seawater lagoons, swamps, sewage farms

A resident wader that migrates within Australia following the rains so can disperse over large distances if the conditions are suitable.  There is a seasonal migration by some birds north out of Victoria in the winter.

Usually in swamps, along rivers etc, close to water.  The nest is on the ground in a scrape or hollow barely lined.  4-6 eggs are laid.  The chicks are active straight out of the egg, the parents stay close to protect the youngsters.

This is a common bird in its range, 260,000 birds are thought to be in Australia.

Banded Stilt: The Banded Stilt is largely white with black wings, no black on the head plus there is a prominent chestnut breast band.

Australian Avocet: This bird has a distinctive up-turned bill.  The plumage is black and white with a noticeable chestnut head.  Usually found in flocks of 100 birds.