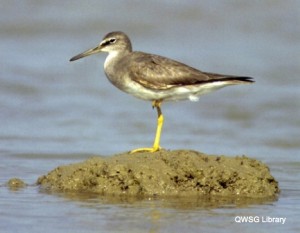 A medium-sized, grey wader with yellow legs and a straight bill

Non-breeding: Upperparts comprising crown, nape, neck, mantle, scapulars and wings are a uniform grey. The supercilium is white and extends beyond the eye.  Throat and chin are white. The breast is light grey and the rest of the lower parts are white. The bill is longish and black but paler yellow toward the base.  Legs are dull yellow.

Breeding: Similar to non-breeding plumage but underparts are finely barred with grey.  Legs are bright yellow.

Juvenile: Like adult non-breeding plumage but with buffy margins to the wing feathers.

In Australia the Grey-tailed Tattler is found all along the coast and offshore islands, more abundantly in northern parts. It inhabits intertidal mudflats and mangrove areas. The species prefers to roost in mangrove trees but also frequents rocky areas, natural or man-made.

The Grey-tailed Tattler usually leaves Australia in April and returns in September to northern parts gradually moving down the coastline until November.

It breeds in alpine tundra in several regions of central and eastern Siberia from south of the Taimyr Peninsula eastward to the Anadyr Plateau.  Breeding possibly also occurs in mountains on the Kamchatka Peninsula and Kurile islands.

Australian population of this species comprises about 36,000 birds.
East Asian-Australasian Flyway Population: about  400,000.

Wandering Tattler: Generally darker in breeding and non-breeding plumages.  The eye-stripe does not extend as far back as on the Grey-tailed Tattler.