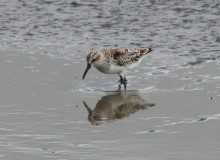 L. f. falcinellus
L. f. sibirica  (This sub-species is the one found in Australia)

Non-breeding:   The head and neck are streaked grey-brown, with a white supercilium and second white line through the side of the crown.  The chin and throat are white.  The grey-brown feathers of the scapulars, back and wings are fringed with white.  The breast is white streaked and mottled with grey.  The rest of the underparts are white.  The rump is white with a dark central line.  The legs are dark grey.  The bill has a broad base, slightly down-curved and black.

Breeding:  The upperparts are dark, the feathers have black centres, chestnut edges and a white tip.  The breast is more heavily streaked.  The supercilium and crown stripes are more pronounced.

Juvenile:  Similar to the non-breeding plumage, but more heavily marked with buff edges to the feathers..

Commonly found on the northern coasts on the mudflats particularly near mangroves.  It roosts on sandy beaches.  It occurs in single figure numbers in other areas.  It is most likely that many birds may be over-looked in Red-necked Stint flocks.

The Broad-bill arrives in Australia in September and October.  It is then thought to travel by the coast to other areas.  It leaves Australia in March and April.

The subspecies sibirica breeds in eastern Siberia, but very little more is known..

Commoner in the north-west, fewer records from the rest of Australia.  It has an estimated population of about 8,000 birds in Australia.  Many may be over-looked in Red-necked Stint flocks.

Red-necked Stint: Slightly smaller than the Broad-bill and does not have the slightly down-curved bill.  It has a single white supercilium.

Curlew Sandpiper: Larger than the Broad-bill, and has longer legs.  Both have down-curved bills but in this species it is more obvious.  The non-breeding plumage is a plainer grey, whilst the red of the breeding plumage is distinctive.